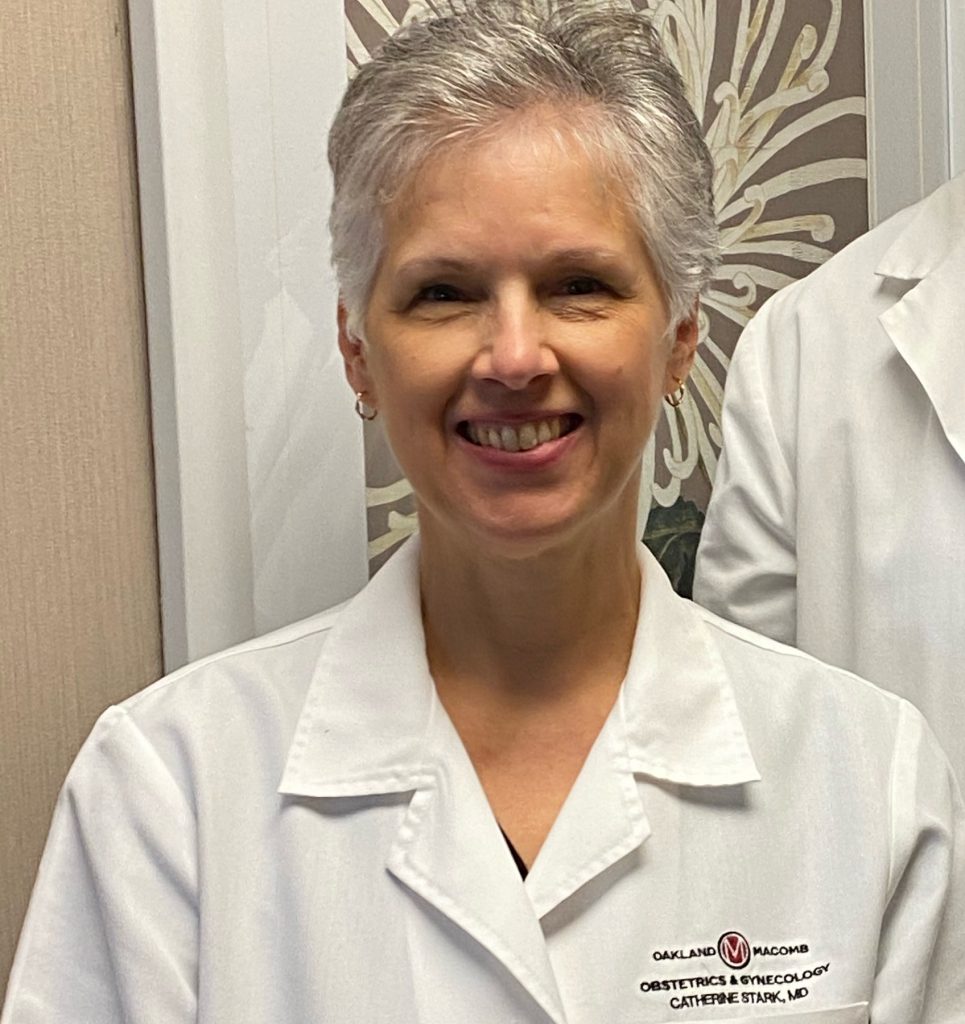 A pro-life doctor in the Detroit area has had inspiring success with Abortion Pill Rescue® and employing pro-life principles in her medical practice. While life-affirming values are not always welcome in medicine, the physicians in Dr. Catherine Stark’s thriving practice serve with these principles and also bless the community with their gifts and medical expertise in the pregnancy help community.

Stark and Dr. James McBride opened their practice in 1998 and it has grown into a large group of pro-life health care professionals.

“We started the practice as a pro-life philosophy for obstetrics,” Stark said. “Our group expanded from two to 15 doctors in the group. When we hire on new people, we let them know our pro-life stance and our practice has thrived for the past 22 years.”

In addition, their life-affirming philosophy extended beyond the private practice into community work with oversight today of six different pregnancy help clinics in Detroit and the surrounding communities.

Over the past five years additional centers were added including an ICU mobile unit (Birth Choice) servicing Detroit and the suburbs offering free ultrasounds and counseling for abortion-minded women.

For the past two years Stark has also been a provider for the Abortion Pill Rescue Network (APRN), receiving clients in need of abortion pill reversal services in the southeastern portion of Michigan.

Stark was a registered pharmacist before attending medical school, and this background only adds to her conviction in regard to the science behind APR.

“I think it makes sound sense from a physiological standpoint,” said Stark. “The APR protocols have sound medical reasoning behind it.”

Stark had to work for the ability to offer the protocol, but once she succeeded, she immediately began meeting women’s needs.

The abortion pill reversal protocol entails prescribing progesterone, the natural hormone in a mother’s body that sustains a healthy pregnancy, to counteract the effects of the abortion. If a pregnant mom takes the first of the two pills in a chemical abortion and experiences regret, she may be able to save her unborn child if she acts quickly enough.

In a chemical abortion, the first drug, mifepristone, also known as RU-486, destabilizes the pregnancy endeavoring to end the unborn child’s life, and in continuing the chemical abortion process it would be followed by misoprostol a day or so later to induce the mother’s labor to deliver her deceased child.

The best chance for success in saving the child occurs when the mom acts within 24 hours, though successful reversals have happened as long as 72 hours after the first abortion drug is taken. In contacting the APRN, a pregnant mom is put swiftly in touch with an APRN provider for an ultrasound and assessment of her pregnancy. When the child is still viable, APR treatment follows. To date, more than 1,000 lives have been saved thanks to the APRN.

They will not acknowledge that the abortion pill is the problem

Abortion supporters in and outside the medical field are opposed to providing women this life-giving choice and attempt to smear abortion pill reversal as unsound, even trying to project the negative effects of abortion drugs onto the APR protocol.

For example, a statement from the American Association of Pro-Life Obstetricians & Gynecologists (AAPLOG), reveals the unwillingness of the abortion industry to complete a study that was not providing findings in line with their bias.

Stark, an AAPLOG member, pointed out the bias: “It showed that progesterone was working to reverse the effects of RU-486 so they stopped the research saying it (the research) is too risky. They will not acknowledge that the abortion pill is the problem.”

Dr. Christina Francis and Dr. Donna Harrison, both from AAPLOG, write of the biased study, “This study was aimed at examining the efficacy and safety of a now well used protocol for abortion pill rescue (or APR). APR provides the possibility to save the unborn child if women change their mind after taking the first medication (mifepristone) of two that are involved with a medication abortion.”

Referencing Francis and Harrison’s writing, Stark noted it was two of the women in the placebo group (who did not receive progesterone to counter RU-486) who required surgery, with one needing a blood transfusion.

“These findings are consistent with what we’ve known about mifepristone, which is that it increases the risk of significant hemorrhage from the uterus due to its physiologic effects of vasodilation and inhibition of platelet aggregation,” AAPLOG stated in response to the study.

A year before joining APRN, Stark was inspired by the thought of utilizing the APR protocol after hearing Harrison present on it. So Stark, wanting to be an APR provider, went to the board of Crossroads and received a hard “no” because of fears their malpractice insurance would not cover the protocol and would drop their service.

Nine months of trying to figure out a way for APR to be offered led Stark to ask her partners in private practice to consider adding it as part of their services. She reasoned, since progesterone is something they already utilize, why wouldn’t they add this service?

So, this was accepted as the plan and their practice would become an APR provider.

An APR mom in need on the first day

When Stark learned of the APRN, she inquired into becoming a provider and her practice was added in January 2019.

It was a Tuesday; her office hours were added for the next day. Stark had just placed the details on a bulletin board and at 1 p.m. that Wednesday, a patient was brought into the office.

The medical assistant told Stark the patient was pregnant and having some bleeding. As she entered the exam room, the woman started to cry and said, “I have to admit something. I took the first abortion pill and I want to save my pregnancy.”

Stark knew the Lord had led her in this direction but her thought at that moment was, “How could God have done this?” In her mind it was confirmation she was doing the right thing.

This patient was not from the area, but she continued appointments at Stark’s practice as the APR protocols were followed until she was 15 or 16 weeks when her care was transferred to her own local OB. The protocol was successful, and several viable ultrasounds confirmed a healthy pregnancy.

In 2019 Stark saw 13 patients through APRN and has seen 15 so far this year. She expressed how grateful she is for God’s confirmation and in the successful life-saving work of Abortion Pill Rescue®.

Calls to the APRN often come in on Friday evenings. When Stark’s phone rings late on Friday she finds herself anticipating it will be the APRN hotline nurse.

“The people I talk to and prescribe for are often ambivalent,” Stark reflected. “A lot of them get pressured into finishing the abortion.”

“I call and try to get them to follow up in the office,” she said. “However, many have a boyfriend or their own mother pushing them into finishing their abortion. I pray for them and hope. Abortion always has two victims.”

She continued, “The mother is damaged by this in a deep spiritual way and unfortunately can’t see past their situation. I try to give them hope as best I can. The truth is you just can’t fix it always. So, I just give it to God.”

“It’s a hard world we’re in,” said Stark, “there are no easy answers. What we can do is provide hope, love and healing to as many as I can and save these precious children.”

“Our answer is to just answer in love,” she said. “She’s a victim and we need to love on her.”

Stark and her colleagues’ passion for life drive them to give their time and expertise to the multiple pregnancy help centers associated with the practice – despite the cost.

Stark also noted of the errant attacks on APR, “The attacks are from politically correct institutions with a different agenda.”

“They don’t want to study this,” Stark said. “The use of progesterone has been a medically accepted treatment for more than 50 years. There is no doubt it is very safe. It is safe to use for women and it does not cause birth defects in babies.”

Francis and Harrison’s AAPLOG statement reflected agreement: “Progesterone administration (in doses consistent with what are currently recommended by the APRN) resulted in a doubling of the chance that a woman who regrets her decision after beginning a medication abortion can save her unborn child.”

Their concluding statement said, “As compassionate healthcare providers, it would be unethical for us to withhold this treatment from women seeking it given the information we have. All women’s healthcare physicians, regardless of their feelings about abortion, should be able to agree on this.”

Stark and all the physicians in her practice wholeheartedly agree.